Pakistan will start day two of the first Test trailing Zimbabwe by only 73 runs with all 10 wickets intact. 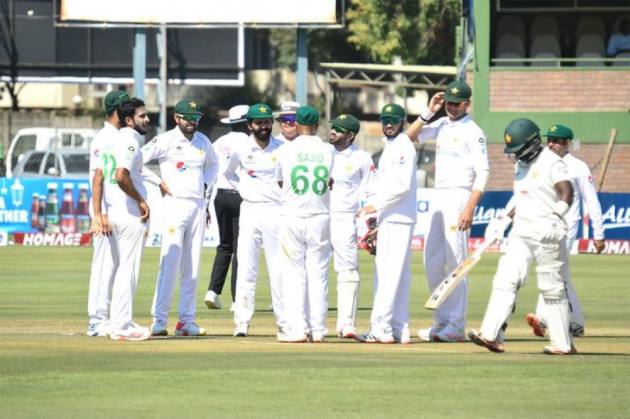 Shaheen Afridi and Hasan Ali tore through Zimbabwe as Pakistan dominated day one of the Test series at the Harare Sports Club. Highlights | News

Zimbabwe were bowled out for only 176 after Brendan Taylor, captain in the absence of the injured Sean Williams, won the toss and opted to bat first.

Afridi and Ali took four wickets apiece as tourists as Zimbabwe were skittled out before tea and Pakistan looked set for a substantial lead after closing on 103 without loss.

Roy Kaia, one of three Zimbabwe debutants, top scored with 48 but it was all about Pakistan's new-ball duo at the start of the two-match series.

Afridi (4-43) claimed his 50th Test scalp in only his 16th match, the same number as it took the great Wasim Akram to reach that landmark, and Ali (4-53) was also outstanding.

They bowled with great skill and discipline along with Nauman Ali (1-29), reducing the hosts to 30-4 before fellow debutant Milton Shumba provided some support for Kaia in a fifth-wicket stand of 59.

Donald Tiripano made an unbeaten 28 but Zimbabwe's shortcomings with the bat were exposed as Pakistan look to end a run of 11 games without a victory away from home in the longest format.

An unbroken opening stand from Abid Ali (56) and Imran Butt (43) put Pakistan in an ominous position at stumps.

At just 21-year-old, Afridi has raced to half a century of Test wickets at the same age and in as many matches as Pakistan legend Akram.

Afridi and Ali played a big hand in a Test series win over South Africa and they did damage with the red ball once again as Zimbabwe bid to secure a first Test away win for almost three years - the previous success coming against England at Lord's.

Kevin Kasuza dragged on an Ali delivery before Zimbabwe had a run on the board and they were 30-4 when Taylor fell to the same bowler for only five.

They showed some fight after lunch, but lost their last five wickets for 52 runs, with Afridi cleaning up Tendai Chisoro for his 50th scalp before bowling Blessing Muzarabani and Richard Ngarava.

One positive for Zimbabwe was an encouraging knock from Kaia, who showed some resistance after coming in at number six in the opening session.

He struck seven boundaries in almost two hours at the crease, just missing out on a half-century on debut when was snared leg before by the excellent Ali.

One Zimbabwean who will have fond memories of the day is umpire Langton Rusere, who became the first Black African to stand in a Test match.