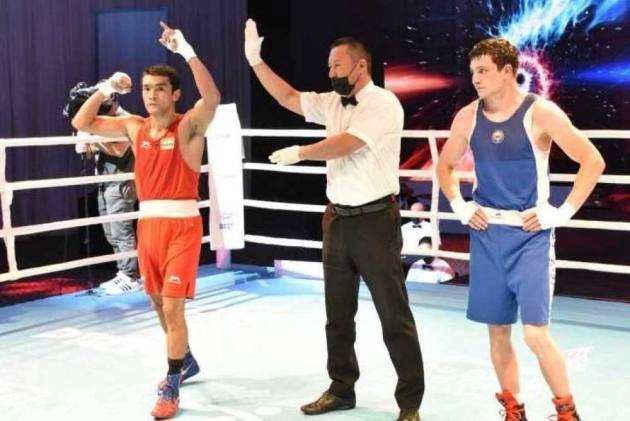 Mohammad Hussamuddin and Shiva Thapa began Indian campaign on a winning note at the 2021 ASBC Asian Boxing Championships as the duo registered victories on opening day in Dubai on Monday. (More Sports News)

The Commonwealth Games bronze medallist Hussamuddin made a cautious start against the Kazakhstan boxer Makhmud Sabyrkhan.

However, with a swift movement and counter attacking display the Indian held an edge over his opponent and completed a 5-0 victory to progress into the quarter-finals at the Championship which is jointly hosted by the Boxing Federation of India (BFI) and UAE Boxing Federation.

Hussamuddin will have a strong challenge in the last-8 match from the top-seed and reigning world champion Mirazizbek Mirzahalilov of Uzbekistan on Tuesday.

The 2013 Asian champion Thapa also made into the quarter-finals after he pulled off a fine show and outpunched Kyrgyzstan’s Dmitrii Puchinn 5-0 in the 64kg opening round bout. Shiva will face Nader Odah of Kuwait in the quarter-finals on Day 2.

Later tonight, another Indian Sumit Sangwan (81kg) will play his opening round match.

Alongside Hussamuddin and Thapa, the World Championships bronze medallist Simranjit Kaur and three other Indian pugilists will also look to confirm medals for the country as they will fight in the quarter-finals on second day on Tuesday.

Sakshi (54kg), Jasmine (57kg) and Sanjeet (91) are the other Indians who will be in action in the last-8 stage of their respective categories at the prestigious event.

The Olympic-bound boxer Simranjit will square up against Uzbekistan’s Raykhona Kodirova in the women’s 60kg quarter-final bout. Two-time youth world champion Sakshi will take on Ruhafzo Haqazarova of Tajikistan.

In the women’s featherweight category Jasmine, who recently had a glorious maiden international outing at the Boxam Tournament where she clinched the silver medal, will be up against Mongolian boxer Oyuntsetseg Yesugen.

In the men’s section, Sanjeet, who received a bye in the first round, will face a challenge from Jakhon Qurbonov of Tajikistan.

The on-going Championships, which marks a return of international boxing in Asia post Covid-19 pandemic, has been witnessing the presence of 150 pugilists from 17 counties including India, Uzbekistan, Philippines and Kazakhstan. India’s best-ever show at the Asian Championship came in the last edition in 2019 in Bangkok where they secured an unprecedented 13 medals including two gold.