Stuart Broad 'Gutted' To Be Ruled Out Of England Vs India Series, To Focus On Ashes

Broad sustained a tear to his right calf during a warm up on Tuesday. He underwent an MRI scan in London on Wednesday lunchtime, which revealed a tear 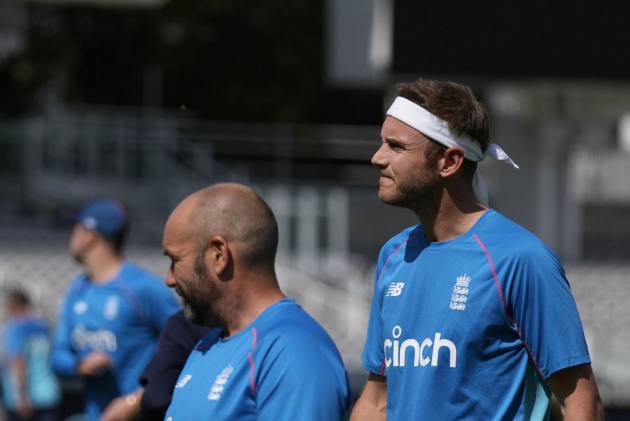 After being ruled out of the ongoing home Test series against India due to a calf injury, a "gutted" Stuart Broad said he will take his time to recuperate and prepare for the Ashes, scheduled to begin in December.

The England seamer sustained a tear to his right calf during a warm up on Tuesday. He underwent an MRI scan in London on Wednesday lunchtime, which revealed a tear.

"Things can change so quickly. A moment before training all smiles then during the warm up, I jumped a hurdle, landed a bit awkwardly on my right ankle then the next step felt like I’d been whipped by a rope as hard as you can imagine on the back of my leg," Broad wrote on his Instagram account.

"I actually turned to @jimmya9 (James Anderson) & asked why he whipped me! but when I realised he was no where near me I knew I was in trouble.

"Scans say grade 3 calf. All so innocuous. Season over & gutted to miss this India Test Series but a huge focus on Australia now. Going to take my time, no rush, baby steps & be the fittest I can be heading out there. Big focus in my brain," he added.

The 35-year-old had picked one wicket in the rain-curtailed first Test that ended in a draw last week.

Broad was on the verge of playing his milestone 150th Test.

England take on India in the second Test at Lord's from Thursday.