Thank You For All The Love, From The Real 'Hockey' Coach: Sjoerd Marijne’s Reply Stumps Shah Rukh Khan

Following Shah Rukh Khan’s tweet in which the actor pretended to be his character, Kabir Khan from the film 'Chak De', Marijne came back with a swift response reminding everyone about who the “real coach” is. 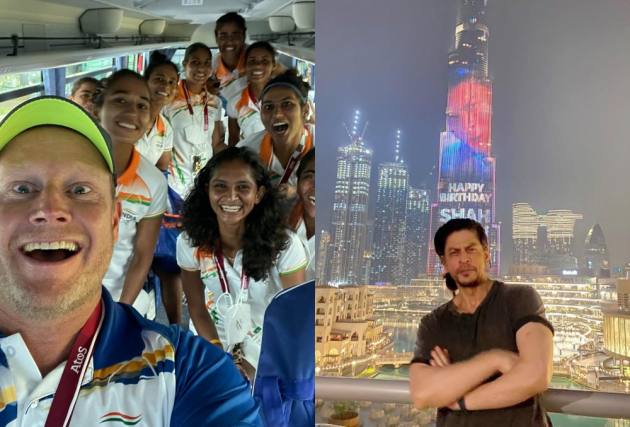 Sjoerd Marijne, Head Coach of the Indian Women’s Hockey Team had a cheeky reply to Bollywood superstar Shah Rukh Khan’s tweet, where the actor urged the coach and the team to win the Gold Medal at the ongoing Tokyo Olympics 2020.

Thank you for all the support and love. We will give everything again.
From: The Real Coach. ðÂÂÂÂÂÂÂÂÂ https://t.co/TpKTMuFLxt

SRK played the role of hockey coach, Kabir Khan, in the 2007 film , 'Chak De', in which he guides the Indian Women’s Hockey team to win the World Cup. SRK used that as the refrence and jokes that as a former coach he, along with billion others, wants the team to win the Gold Medal.

Haan haan no problem. Just bring some Gold on your way back….for a billion family members. This time Dhanteras is also on 2nd Nov. From: Ex-coach Kabir Khan. https://t.co/QcnqbtLVGX

The Indian Women’s Hockey Team best Australia 1-0 in the Quarter Finals in Tokyo today, making it to the finals of the tournament for the very first time.
Earlier, Marijne had revealed that he had arranged for the movie-screening for the team after three back-to-back losses.

Our chakk de moment never felt more real! Our girls beat Aussies 1-0 and storm into semis !!!! Go for it @imranirampal your girls have our heart! ðÂÂÂÂÂÂ®ðÂÂÂÂÂÂ³ðÂÂÂÂÂÂÂÂÂðÂÂÂÂÂÂ¼

Kapoor shared the news of the win on Instagram and wrote, "What a proud moment for us! Both our hockey teams went into the semi finals! Let's go team India. We're so proud."

The Indian side will play Argentina in the semifinal on Wednesday.