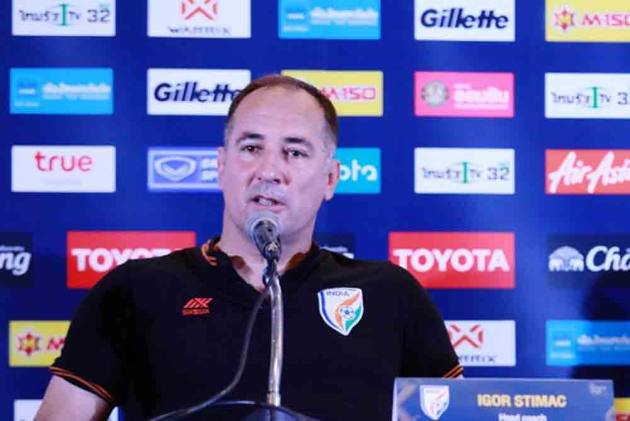 India football coach Igor Stimac on Sunday demanded better control of the mid-field from his players, urging them to come out of the ISL mindset ahead of the international friendly against the UAE on Monday after a morale-lifting draw against Oman.

India were found wanting in mid-field control in the first half of the friendly match against Oman on Thursday but largely made amends in the second session to hold the more fancied Gulf side 1-1.

Asked about the mistakes he would not like his players to repeat in the match against the UAE on Monday, Stimac said, "Positioning of the ball in the middle part of the pitch, that is crucial.

"In international football if you give space to opposition players you will suffer. These are the areas we need to work on," the head coach said.

"Our players will need to understand that this is not ISL (Indian Super League) where there is a lot of space and time to control the ball in the middle. If you behave the way you do in ISL in international matches you will be badly hurt."

He said the young players should learn to adapt to international football.

"There is no time and space in international football. You need to play 1-2, you need to be quick, sharp and you need to control your players in the middle and follow his runs behind," said the former World-Cupper and reputed defender for Croatia in his playing days.

"We are working on these (areas) and will be better in future."

He, however, exuded confidence that international friendly matches against the likes of Oman and the UAE will help the Indian players learn from their mistakes faster.

"So, getting to play against Oman and UAE should help my players in learning and gaining experience about what is required in international football."

Stimac is happy that there is for almost all the positions in the team, especially goalkeeping.

"It is a good headache. Gurpreet Singh Sandhu and Amrinder Singh (for goalkeeper's position), they can push each other to get better and better. That is competition.

"My philosophy is that there is no past credit and whosoever is the best at present and does better in training, he will play."

He also had words of praise for striker Manvir Singh who scored the equaliser against Oman.

"Manvir has done his job. When we first saw Manvir we knew that he would be the player for the future. But we need 5-6 Manvirs so that there is intense competition for the role of striker."