The two celebrities were shooting in Chennai for their respective projects when they met each other on Thursday. 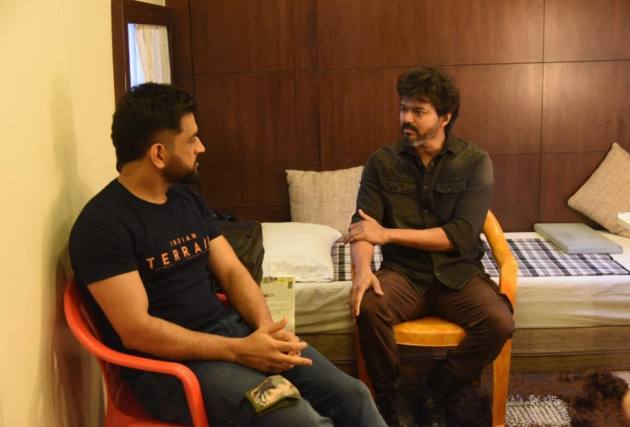 According to reports, the two met each other at the Gokulam studios in Chennai. While Vijay was shooting for his upcoming film ‘Beast’,  Dhoni was in the studio to shoot for a commercial.

It was Dhoni, who went and met the actor after the Chennai Superkings' skipper  was informed that the popular actor is in the same studio. Both celebrities were seen talking to each other in the vanity van.

The pictures of their meeting, and a video clip in which the actor was seeing off the star cricketer after a handshake went viral as well in the social media which was shared by many.

No captions required. Thala @msdhoni and Thalapathy @actorvijay together and it’s a Feast for our eyes. #WhistlePodu #Thalapathy #Dhoni #MSDhoni #Master

Dhoni, called 'Thala,' (captain or leader) by the fans of Chennai Super Kings arrived in Tamil Nadu’s Capital on Tuesday ahead of the departure of a group of team’s players to the UAE. Dubai would host the remainder of the Indian Premier League 2021, next month.

Chennai Super King's twitter handle too shared a picture of the duo meeting.  Nelson Dilipkumar, the director of 'Beast', too, couldn’t resist from posting the photo of the two celebrities.

(With Inputs From Agencies)

Donal Bisht: Inside ‘Bigg Boss 15’ Nobody Is There From Their Heart; They Are Just Faking Everything!

‘Bigg Boss’ To Contestants: Lose Rs 25 Lakhs From The Prize Money Or Get Out

Aamir Khan Trolled For His Latest Ad On Firecrackers

Why Is Bollywood So Afraid Of Supporting Shah Rukh Khan ?

'Bhavai' Movie Review: Watch it for Pratik Gandhi, if at all!

Taapsee Pannu: Get Appalled When Critics Try To Give Me Career Choices