There was no shortage of tributes to Yuvraj Singh as the news of his retirement filtered through on Monday, with Virender Sehwag, Stuart Broad, Kevin Pietersen and Virat Kohli leading the way on social media 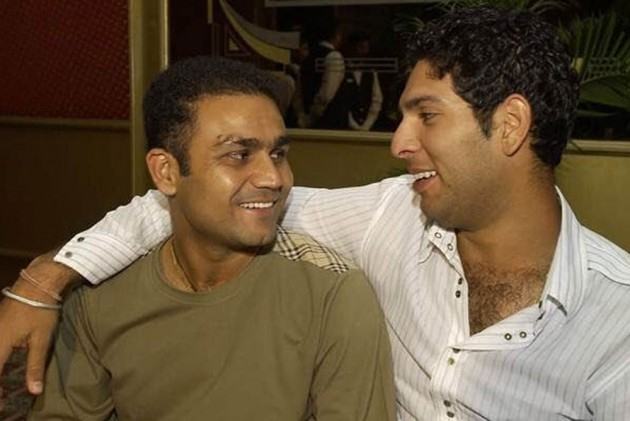 Hailed as one of the greatest ever match-winners for India, Yuvraj Singh brought down the curtains on his brilliant career. The 37-year-old announced his retirement from international cricket at a press conference in Mumbai on Monday.

Honouring the ferocious southpaw, his former team-mate Virender Sehwag said that "Players will come and go, but players like Yuvraj are very rare to find".

Players will come and go,but players like @YUVSTRONG12 are very rare to find. Gone through many difficult times but thrashed disease,thrashed bowlers & won hearts. Inspired so many people with his fight & will-power. Wish you the best in life,Yuvi #YuvrajSingh. Best wishes always pic.twitter.com/sUNAoTyNa8

England pacer, Stuart Broad, who was hit for six sixes in an over by Yuvraj, hailed th Indian all-rounder as a legend in a seemingly conciliatory message, which reads:

WATCH: Yuvraj SIngh's Six Sixes In An Over

India captain Virat Kohli thanked Yuvraj for giving "so many memories and victories."

Congratulations on a wonderful career playing for the country paji. You gave us so many memories and victories and I wish you the best for life and everything ahead. Absolute champion. @YUVSTRONG12 pic.twitter.com/LXSWNSQXog

Congratulations Prince @YUVSTRONG12 on a wonderful career. You were the best ever white ball cricketer India had. @BCCI should retire Number 12 jersey in the tribute to your career. Wish I could bat like you Champion #Yuvrajsinghretires #ThankYouYuvraj #ThankYouYuvi

Mohammad Kaif, his long-time partner in crime, also said that Yuvraj is "One of the greatest match-winners in the history of the game".

One of the greatest match-winners in the history of the game,a fighter who built an extraordinary career through difficult challenges & came out a winner every time-We all are so proud of you #YuvrajSingh , u can be very proud of what u have you done for our country @YUVSTRONG12 pic.twitter.com/w4wUe31De0

While announcing his retirement, Yuvraj told reporters that he has decided to move on.