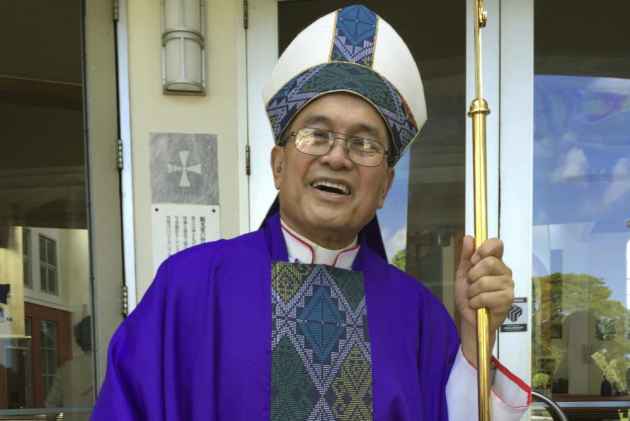 The Vatican  has convicted ex- Guam Archbishop, who was accused of sexually abusing minors.

The Vatican removed the suspended archbishop from office and ordered him not to return to the Pacific island after convicting him of some charges in a sex abuse trial.

The Vatican didn't say what exactly Archbishop Anthony Apuron had been convicted of, and the sentence was far lighter than those given high-profile elderly prelates found guilty of molesting minors.

It amounts to an early retirement anywhere in the world but Guam, a remote US Pacific territory where nearly everyone is Roman Catholic.

"While I am relieved that the tribunal dismissed the majority of the accusations against me, I have appealed the verdict," said a statement from Apuron distributed by his Guam attorney, Jacqueline Terlaje.

"God is my witness; I am innocent and I look forward to proving my innocence in the appeals process." Pope Francis named a temporary administrator for Guam in 2016 after Apuron was accused by former altar boys of sexually abusing them when he was a priest.

Dozens of cases involving other priests on the island have since come to light, and the archdiocese is facing more than USD 115 million in civil lawsuits alleging child sexual abuse by priests.

Apuron strongly denied the charges and said he was a victim of a "calumny" campaign. He wasn't criminally charged. The statute of limitations had expired.

A statement from the tribunal in the Congregation for the Doctrine of the Faith, which handles sex abuse cases, said Apuron had been convicted of some of the accusations against him.

Under an appeal, the penalties could be suspended until the case is resolved. However, it's not clear whether that has happened now that Apuron has indicated he has appealed.

In the past, when an elderly or infirm priest has been convicted by the Vatican of sexually abusing minors, he has often been removed from ministry and sentenced to a lifetime of "penance and prayer."

Younger priests convicted of abuse have been defrocked, removed from ministry or forbidden from presenting themselves as priests.

Francis, however, has intervened in a handful of cases to lower sentences, and several high-ranking Vatican prelates oppose defrocking convicted molesters and have long lobbied for more lenient sentences.

In the case of Apuron, no restrictions on his ministry as a priest were announced. An ailing Apuron greeted Francis at the pope's February 7 general audience.

Apuron is one of the highest-ranking churchmen to be convicted by a Vatican sex abuse tribunal, and his rank as archbishop may have played a role in his seemingly light sentence.

Assuming the evidence against him was grave and credible, the Vatican might still have been reluctant to remove him from the clerical state, as it has done in hundreds of cases of defrocked priestly abusers, because Apuron would still remain a bishop theologically speaking, noted Kurt Martens, professor of canon law at Catholic University of America in Washington.

That means he could continue ordaining priests, ordinations that would be considered illicit but still valid, a schismatic conflict the Vatican would want to avoid.

The Catholic community on Guam has been convulsed by the Apuron scandal, with weekly protests demanding his ouster. One of the former altar servers who accused Apuron of molesting him said he felt relieved by the Vatican's announcement.

"The verdict was what we were hoping for," Roland Sondia said from Guam, where it was already Saturday. "I think the fact that he won't be able to return to the island is justice." While The Associated Press doesn't typically name victims of sex abuse, Sondia has come forward publicly identifying himself as one of Apuron's accusers.

The attorney for the victims said he was overjoyed with the outcome. "We're ecstatic. It's a justified verdict," said David Lujan.

"It is a monumental marker in our journey toward healing as one Church, one people in God. I pray that all people would embrace this call for healing," Byrnes said.

The accusations against Apuron also involved grave financial problems in the archdiocese and the purchase of a valuable property by Apuron for a diocesan seminary that he actually turned over to a controversial Catholic movement.

A lay group that agitated for Apuron's removal, "Concerned Catholics of Guam," pushed for an investigation into the archdiocesan seminary, which Apuron opened in 1999 and moved to an 18-acre (seven-hectare) property thanks to a USD 2 million anonymous donation.