PM Modi tweeted and thanked US President for his warm birthday wishes, says 'US-India friendship is good for the entire humanity'. 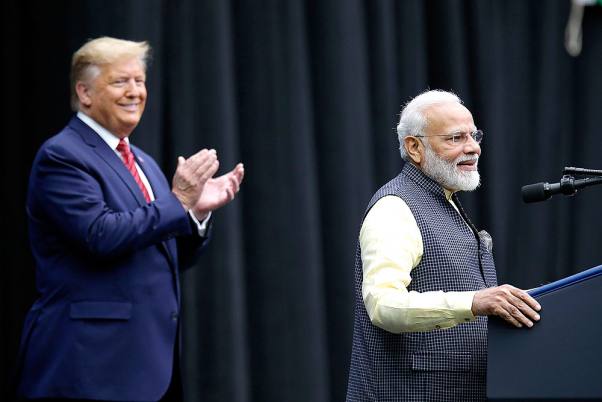 US President Donald Trump greeted Prime Minister Narendra Modi on his 70th birthday, praising him as a "great leader and loyal friend".

Trump was among a host of world leaders, including Russian President Vladimir Putin, British Prime Minister Boris Johnson, and German Chancellor Angela Merkel, who wished Modi on his birthday and lauded him for strengthening ties with their countries.

"I would like to extend best wishes and a very happy 70th birthday to the Prime Minister of India, @narendramodi. Many happy returns to a GREAT LEADER and loyal friend!" Trump tweeted on Thursday.

"Thank you @POTUS @realDonaldTrump for your warm wishes. The friendship between our nations is strong and is a force for good for the entire humanity," Modi responded in a tweet on Friday.

Thank you @POTUS @realDonaldTrump for your warm wishes. The friendship between our nations is strong and is a force for good for the entire humanity. https://t.co/P848MBkYBr

Trump also posted a photograph of him and First lady Melania Trump with Prime Minister Modi at the 'Namaste Trump' event. The two leaders had their hands raised and clenched before a 125,000-strong crowd who had gathered to welcome the US president on his first India visit at Motera cricket stadium in Ahmedabad in February this year.

I would like to extend best wishes and a very happy 70th birthday to the Prime Minister of India, @narendramodi. Many happy returns to a GREAT LEADER and loyal friend! pic.twitter.com/CWlVkHk16X

At the event, Prime Minister Modi had said that a "new history" was being created. Modi and Trump enjoy a "special relationship" and have been working on a number of regional and global issues.

They frequently talk over the phone and the countries have had an unprecedented level of cooperation even during the coronavirus pandemic.

India supplied hydroxychloroquine to the US in the early stages of the pandemic and Trump ordered ventilators to India. The two countries are also collaborating on the development of vaccines and therapeutics.

On Thursday, Lisa Curtis, the deputy assistant to the US president, told a top American think-tank the Trump administration has elevated the relationship with India and solidified the growing partnership "in ways not seen in any other US administration".

“The joint statement signed by President Trump and PM Modi following Trumps’ visit to India in February is testament to this administration's commitment to building this vital partnership," Curtis said.

"Whether we are talking about increasing collaboration to develop therapeutics and vaccines to combat COVID-19; increasing defence cooperation, such as India's recent decision to purchase US multi-role and attack helicopters worth USD 3 billion; or enhancing collaboration on cybersecurity, the US-India relationship has never been better,” she said.

Putin and Merkel wrote letters to Modi, and Johnson and several others tweeted. Several other organisations and individuals in the US also greeted Prime Minister Modi.

“Best wishes to” Modi on his 70th birthday, US India Business Council said.

“Prime Minister Modi has steered the US-India relationship to new heights, creating a vision for India to play a significant role in helping the world bounce back post-pandemic. We will continue to strengthen US-India ties under your leadership,” USIBC said.

Modi responded individually to many of those who wished him on Twitter.

"People from all over India, from all over the world have shared their kind wishes. I am grateful to each and every person who has greeted me. These greetings give me strength to serve and work towards improving the lives of my fellow citizens," he said in one of his late night tweets.

The prime minister also urged people to take precautions to defeat the coronavirus.

"Since many have asked, what is it that I want for my birthday, here is what I seek right now: Keep wearing a mask and wear it properly. Follow social distancing. Remember ‘Do Gaj Ki Doori.’ Avoid crowded spaces. Improve your immunity. Let us make our planet healthy," he said.