Prime Minister Sheikh Hasina recalled that Hindus had fought shoulder to shoulder with their Muslim brothers during the war of liberation and had equal rights in Bangladesh. 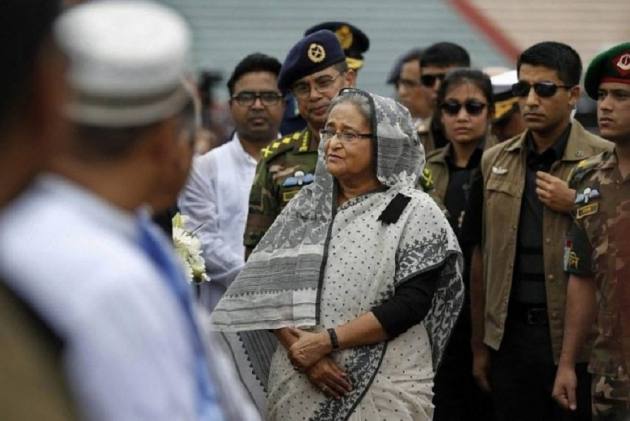 Communal violence in Bangladesh triggered by the alleged desecration of a Koran at a Durga Puja gathering in Comilla has led to attacks on Hindu temples, homes and business outlets in several places across the country. There is however a silver lining in the way the Awami League government under Prime Minister Sheikh Hasina has handled the crisis. The reaction of the majority community is also to be noted. Sheikh Hasina is spreading the motto: “Each unto his or her religion, festivals are for all”

Peace marches and protests against mob attacks have been organised by several citizens groups. Whether it is students of the Dhaka university campus or the ruling Awami League functionaries, all are together in condemning the spread of the communal virus. It is only when people stand together against hate that a message is conveyed.

"We, along with the people of the country, will unitedly build resistance under the leadership of Sheikh Hasina," he said during the party's "harmony rally." He asked all party cadres to organise such peace rallies across the country. Prime Minister Sheikh Hasina, also joined the meeting virtually. Similar peace rallies are scheduled to be organised across the country with ministers visiting the areas affected by violence. A similar rally was held Tuesday in Chittagong.

The day after the Comilla incident, Sheikh Hasina promised action against those responsible for the attacks against the Hindu minorities. She was taking part in a Durga Puja celebration attended by swamis of the Ramakrishna mission and other important Hindu devotees.

The Prime Minister said that Hindus have the right to worship without fear as much as Muslims and people of other religious groups. She recalled that Hindus had fought shoulder to shoulder with their Muslim brothers during the war of liberation and had equal rights in Bangladesh.

She recalled that her father, Sheikh Mujibur Rahman, turned Bangladesh into a secular country by incorporating secular values in the new Constitution. "Bangabandhu wanted people of all faiths to practice their respective religions freely," the Prime Minister said.

This is exactly the reason why the religious right dislike the Awami League government. The Jamaat in Bangladesh is against a secular government and have long aimed for Sharia rule. The Awami League ministers and supporters are blaming the opposition Bangladesh National Party (BNP) and the Jamaat who were once in a coalition  government headed by Khaleda Zia,  for stirring the communal cauldron. Both the Jamaat, barred from taking part in elections as well as the BNP have been dealt a severe blow by the Awami League. During decades of Sheikh Hasina rule, the BNP leaders have been hounded by numerous corruption cases. Both the Jamaat, often acting as storm troopers for the BNP, and Khaleda’s party are looking for a way to revive their political fortunes.

In a statement issued on Tuesday the Bangladesh foreign ministry said: “The Prime Minster called upon all to maintain communal harmony at any cost. The government has urged all concerned to uphold the spirit of tolerance, inclusivity, peace and pluralism and stand guard against further efforts to malign the state institutions and tarnish the image of the country.”

The statement went on to add: "It’s regrettable that the local elements that had opposed Bangladesh’s independence 50 years ago are still propagating their toxic narratives to instigate violence, hatred and bigotry," the ministry said.

They are trying to undermine Bangladesh’s secular, non-communal and pluralistic credentials in the international context by deliberately targeting one of the biggest religious festivals of the country, it mentioned. Some 71 arrests were made and the main culprit of the Comilla incident apprehended, the foreign ministry claimed.