Moscow, however, denied it was responsible, calling the reports "fake". 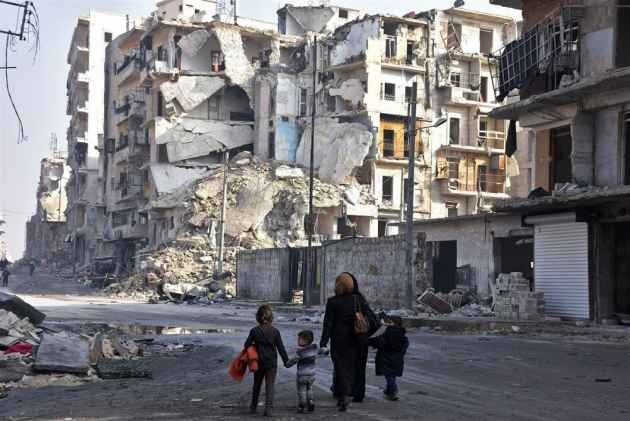 Russian air strikes on a market in northwestern Syria killed 27 people on Monday, a monitor said, in the latest violence to plague the country's last major opposition bastion.

Moscow, however, denied it was responsible, calling the reports "fake".

"The Russian air force was not carrying out any missions in this part of Syria," said a defence ministry statement.

The jihadist-run Idlib region, home to some three million people, is supposed to be protected by a months-old international truce deal, but it has come under increased bombardment by the Syrian regime and its ally Russia since late April.

The spike in violence has killed more than 650 civilians and damaged or knocked out of service two dozen health facilities.

More than 330,000 people have fled violence in the area over the past three months, according to the United Nations.

On Monday morning, 25 civilians and two people still to be identified were killed in raids that hit a vegetable market and surrounding areas in the town of Maaret al-Numan in Idlib province, the Syrian Observatory for Human Rights said.

More than 45 other people were wounded, according to the monitor, which said the death toll could rise as many of those injured were in a critical condition and people were still trapped under rubble.

The Britain-based Observatory says it relies on a network of sources inside Syria and determines whose planes carried out air strikes according to type, location, flight patterns and munitions involved.

Men drenched in blood were carried away from the site of the attack by residents and rescue workers, who used mattresses as makeshift stretchers, an AFP photographer said.

He saw the corpse of one man sprawled on the ground near a motorcycle, rubble surrounding his lifeless body.

With his eyes closed and his face covered in dust, another man clutched the arms of two people helping him out of the area, the photographer added.

The White Helmets rescue group said that one of its volunteers was killed in the raids.

At least six rescue workers have been killed since April.

Russia and rebel backer Turkey brokered an agreement in September seeking to stave off an all-out regime assault on Idlib, but the deal was never fully implemented as jihadists refused to withdraw from a planned buffer zone.

The Hayat Tahrir al-Sham group, led by ex-members of Al-Qaeda's former Syria affiliate, in January extended its control over the region, which spans most of Idlib province as well as slivers of the adjacent provinces of Latakia, Hama, and Aleppo.

On Sunday, air strikes on Idlib killed 18 people, including a young citizen journalist.

Anas al-Dyab, a photographer and videographer in his early 20s, was a member of the White Helmets who also contributed to AFP.

He was killed in Russian air strikes in his hometown of Khan Sheikhun, rescuers and the Observatory said.

The Idlib region "has fast become one of most dangerous places in the world for civilians and aid workers today; a crisis within a crisis," said David Swanson of the UN Office for the Coordination of Humanitarian Affairs.

"This violence must stop and it must stop now," he told AFP.

President Bashar al-Assad received two Vatican cardinals in Damascus who handed him a letter from Pope Francis expressing "deep concern for the humanitarian situation in Syria, especially the dramatic conditions of the civilian population in Idlib."

Regime forces have been locked in battle with jihadists and allied rebels on the edges of the Idlib region but have failed to secure significant advances.

According to Sam Heller, an analyst at the International Crisis Group think-tank (ICG), the violence is likely to continue until "Russia and Turkey reach an agreement to calm" the frontline.

In the meantime, "each side will try to put pressure on the other through their Syrian partners on the ground" or "directly, (as) with the Russian bombing of parts of Idlib", he added.

Syria's war has killed more than 370,000 people and displaced millions since it started in 2011 with a brutal crackdown on anti-government protests.